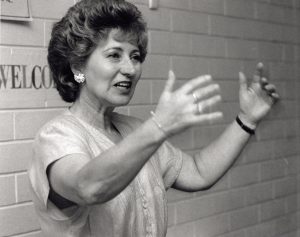 Early days
Coming to Australia from Holland in 1955, Cathy Weber completed her education at Cabra, a Dominican College for girls in Adelaide. For the first two years, the Weber family ran a small delicatessen in Tynte Street North Adelaide, and then her four brothers started up in business in Torrens Road Brompton.

In Holland, Cathy had studied piano to Grade Seven level. But she was increasingly drawn to choral classical and sacred music; there had always been a strong family tradition of choir membership in Holland. As the family settled into life in Australia, and with her brother Bert Weber, Cathy joined church choirs in North Adelaide and then in Norwood. 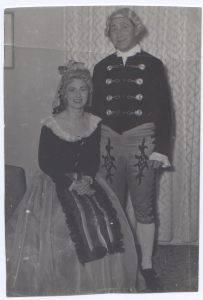 Cathy gained the Licentiate in Singing Performance at The Elder Conservatorium at The University of Adelaide, and then for over thirty years, appeared as featured soprano soloist in many recitals, operas, musical comedies, oratorios and masses, and performances of new music.

In the early 1960s, Cathy performed in several operetta and musical productions, included lead roles as Tuptin in The King and I; Katherine in The Vagabond King; Rose Maybud in Ruddigore; and the soprano role of Patience in Patience by Gilbert and Sullivan. Early in her career, Cathy performed in a number of live brodcasts of lighter music, from the Regent Theatre, with Adelaide organist Alec Regan. She was also a member of the Edmund Grey Quartet, formed by John Edmund and Donald Grey from Theatre 62 where many of these operettas and musicals were performed.

In addition to membership of the Adelaide Philharmonic Choir and of the St Francis Xavier Cathedral Choir, Cathy was a foundation member of The Corinthian Singers, directed by James Govenlock.

Roles in Operas
Cathy Weber’s opera performances included the roles of Despina in Cosi Fan Tutti by Mozart in 1968, Euridice in Orpheus by Gluck in 1972, Marcellina in Fidelio by Beethoven in 1972, and Savitri by Gustav Holst (concert version only) in 1979. Cathy was soloist in Ode on St Cecilia by Handel in 1963; the St John Passion by Bach in 1966; Requiem by Fauré in 1974; St Cecilia Mass by Scarlatti in 1977; Samson by Handel in 1978; Dixit Dominus by Handel in 1981; Stabat Mater by Rossini in 1986; and in 1987, the Harmony Mass by Haydn.

For many years, Cathy was a chorister and soloist with the choir of the Cathedral Church of St Francis Xavier in Adelaide. By invitation, Cathy travelled as chorister and soloist with the Cathedral Choir during their December 1990 European tour, under the direction of Organist and Master of Choristers Dr Melville Waters, performing in London, Rome and Salzburg to mention just three of the cities in which the choir performed

Cathy participated in the special recordings made by The ABC Adelaide Singers with the Adelaide Symphony Orchestra of In the Head the Fire, by Australian composer Nigel Butterley and directed by Patrick Thomas, for which the ABC recording was awarded the International Italia Prize in 1968.

In addition to weekly radio broadcasts and other recording commitments by The Adelaide Singers, Cathy was featured soloist on several ABC stereo recordings with the Adelaide Symphony Orchestra, in works by Australian composers, including Balade to St Cecilia by Colin Brumby, Harvest Thanksgiving by Malcolm Williamson, and Limbo by Don Banks.

Adelaide Festival of Arts
Cathy was regularly featured in festivals in Adelaide. Cathy’s solo performance with Christopher Hogwood in An Evening with Dr Haydn, during the 1982 Festival of Arts was broadcast live across Australia on ABC FM from The Elder Hall at The University of Adelaide. Other featured performances by Cathy included Sometimes with the One I Love, by Nigel Butterly, and Spring Symphony by Benjamin Britten. 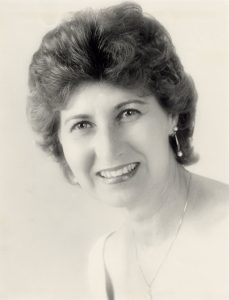 A commissioned work, with the world premiere performed by Cathy for the 1982 Adelaide Festival of Arts was William Lovelock’s Gaudia Vitae. Cathy performed in the Dutch Festival of 1982, as soprano soloist in original works by Adelaide composer Andre Oosterbaan. In 1988, Cathy was invited to lead choral workshops during the prestigious University of Western Australia Summer School.

Murray Park Singers / Cantabile Singers
In 1978, Cathy Weber took on the task of developing the Murray Park Singers, a small community choral group then based at Murray Park College of Advanced Education (now Magill Campus, University of South Australia), and which Cathy built up, from an initial eight members to a very proficient four-part choir of 60+ members by 1985. 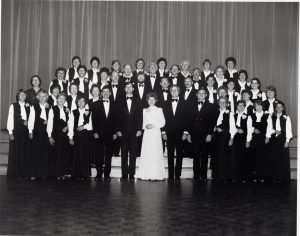 The repertoire ranged from the sacred to the secular, with regular performances at Murray Park CAE, in a variety of Adelaide churches and other venues, and with occasional tours to nearby regional areas. The choir regularly particulated in summer schools and choral workshops, as well as the performance of Christmas carols in shopping centres. In 1988, the choir travelled to Bankstown in Sydney as part of the Bicentennial celebrations. There was also a vibrant social life among choir members and supporters.

In September 1990, under the direction of Cathy Weber and with associate artist and accompanist, internationally known pianist Renate Turrini, the Murray Park Singers undertook a two-week tour of the South Island of New Zealand, performing in several centres including Christchurch, Invercargill and Dunedin. Close on seventy people travelled to New Zealand, 35 singers and 35 member of friends and supporters. As part of the publicity for this tour, the Murray Park Singers were photographed on the steps of the Law Courts building in Adelaide. 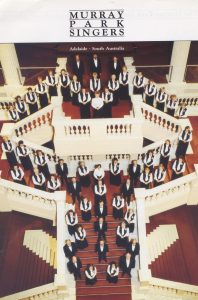 In addition to long term associate artist and accompanist Renate Turrini, the Murray Park Singers were fortunate to have several other accompanists who have since achieved international recognition, including pianists Lance Coburn and Anna Goldsworthy. Under Cathy’s direction, many concert performances in Adelaide included featured appearances by other Adelaide musicians, including with the Norwood Symphony Orchestra and the Pembroke Big Band.

Over the years, many members of the Murray Park Singers participated in large choral events during the Adelaide Festival of Arts, with the Adelaide Symphony Orchestra under the direction of international conductors, including performances of The Damnation of Faust by Berlioz, directed by Mark Elder, Beethoven’s Symphony Number 9, the Choral Symphony directed by Vladimir Askenasy, and the Missa Glagolitica, by Janacek.

A Papal Event
Although not a church choir, the Murray Park Singers were invited by Dr Melville Waters to perform in the Adelaide Festival Centre during the 1986 visit to Adelaide, by Pope John Paul 2 during celebrations to mark our state’s 150 years. Because the St Francis Xavier Cathedral Choir was fully committed with a major Papal event later that same morning at Victoria Park Racecourse, security issues and tight time lines prevented them from participating in this earlier event.. 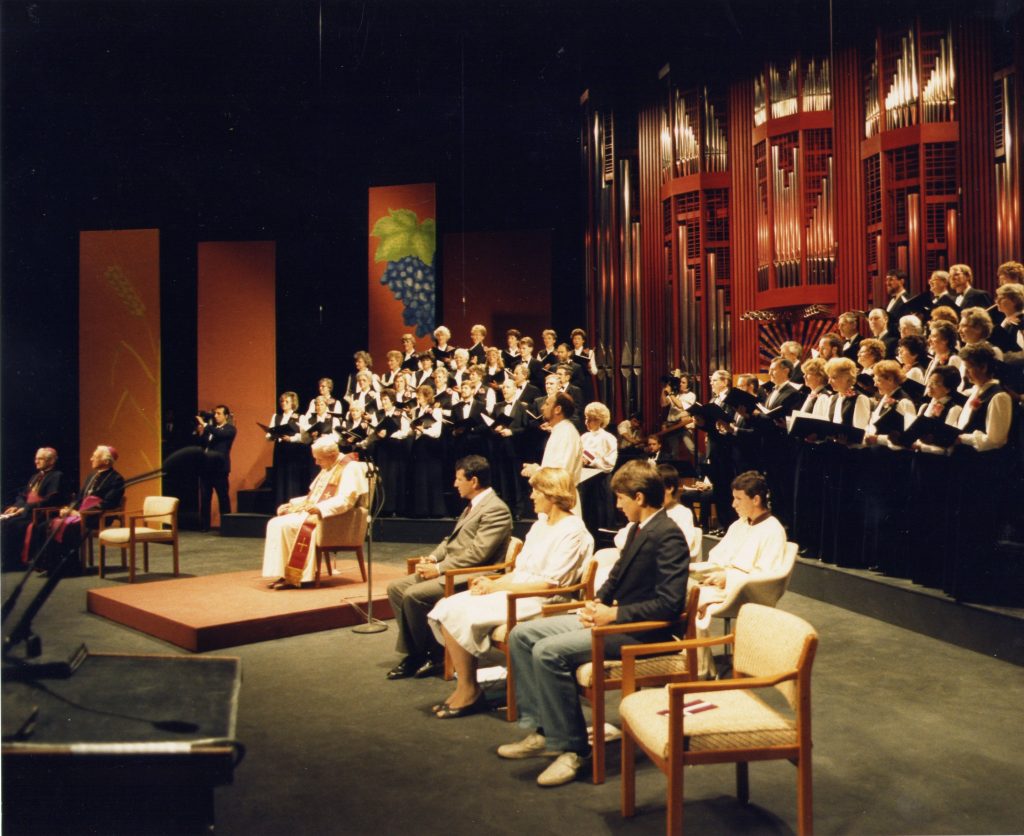 Beginning at 8am, and televised worldwide, the Festival Centre event opened with a Papal Fanfare which Cathy had commissioned from Dr Robert Illing, Faculty of Music, Flinders University, and sung by the Murray Park Singers, with Cathy directing, with Polished Brass trumpeters and Bruce Raymond, and with John Hall providing the accompaniment on the Adelaide Festival Theatre organ. 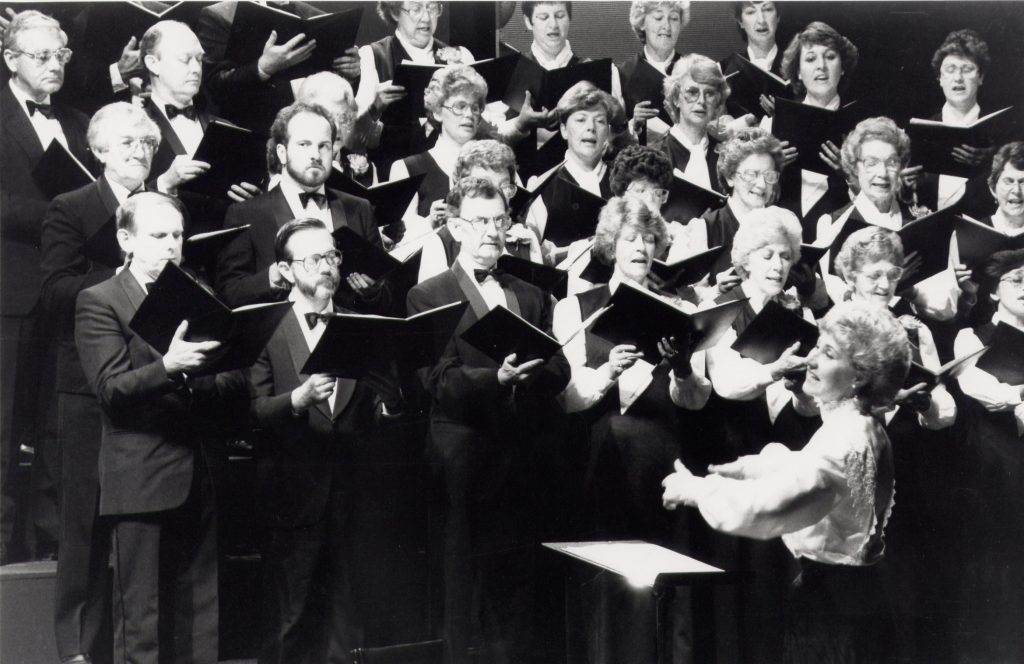 In 1992 when the Magill Campus changed from being a College of Advanced Education to become part of newly-formed University of South Australia, the Murray Park Singers moved off-campus and soon after, re-branded to become Cantabile Singers, as an independent body with its own Board of Management. In 1996 and after eighteen years as Director of Music for the Murray Park Singers and then for Cantabile Singers, Cathy handed over the choir to incoming Director of Music Brett Czechowski, at that time Director of Music at St Ignatius College in Adelaide.

The Adelaide Consort of Singers
With The Adelaide Consort, Cathy gave hundreds of performances in schools and in association with rural community choirs in SA and Tasmania, through the state Education Departments and Arts Councils, and with associate artists John Hall, David Stanhope and David McSkimming.

The Adelaide Consort was also involved in ten Choral Summer Schools in and around Hahndorf in the Adelaide Hills, with assistance from the Arts Council of South Australia, and with associate artist Renate Turrini. The final musical performance was often complemented by a display of artworks painted during a concurrent summer school for visual artists. Norma Hunter contributed to many of the Summer Schools both as a professional singer and a highly accomplished artist in her own right. 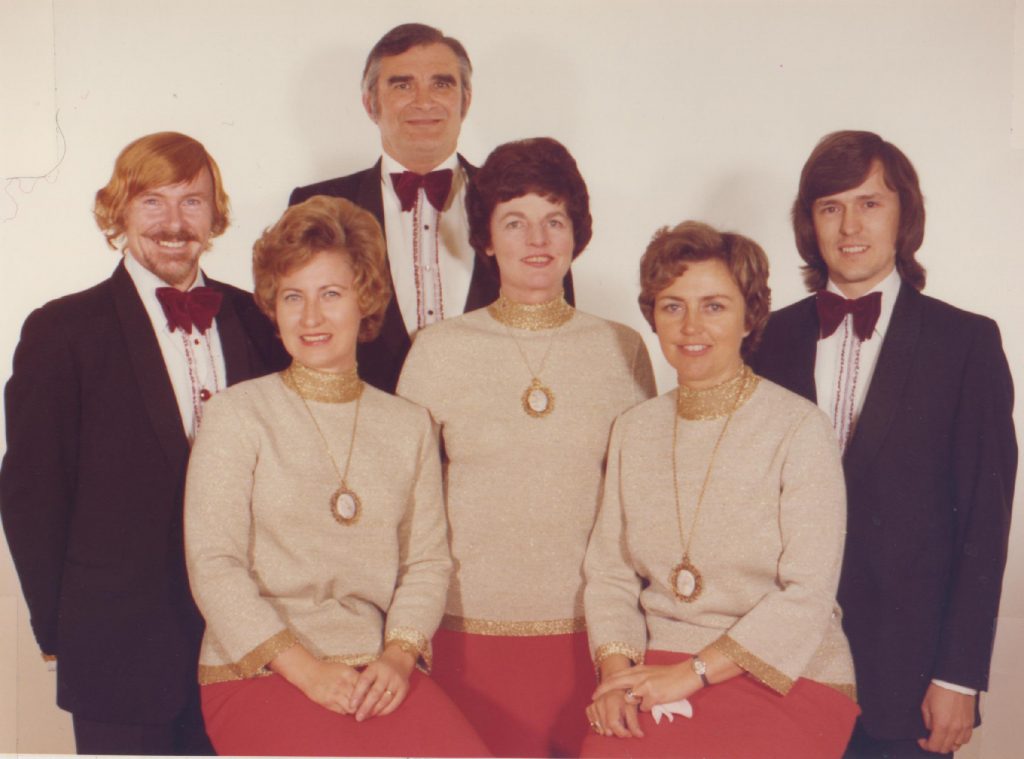 Cathy’s involvement in choral work and in teaching of singing was very useful in these summer schools and included workshops and performances in collaboration with local community choirs, based around performances of The Merry Widow, Merrie England and Carmen. The Adelaide Consort of Singers also contributed regularly to In Quires and Places, a regular programme of sacred choral music on ABC Radio National.

Teaching
For many years, and in addition to her private teaching, Cathy taught singing in Adelaide state and private schools and with TAFE, and for over 25 years was teacher of singing and choral consultant to the award-winning senior Pembroke School choirs, with Directors of Music Dr Melville Waters and from 2002, Dr Kevin Cameron. 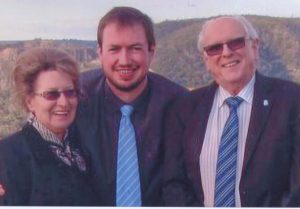 Retirement
Cathy retired from public performances in 1998 and from teaching in 2012. She now lives in retirement in Adelaide, with husband Tony Ryan. They have one son Christopher, born in 1974. In May 1970 and to celebrate her marriage to Tony Ryan, Australian composer and good friend Vincent Plush dedicated his composition Magnificat to Cathy Weber.